Sentiment analysis is a technique for evaluating the overall positivity, negativity, or neutrality of a body of text. It does this by scoring individual words based on whether they are positive or negative, and how strong a word it is in either direction. Positive words receive positive integers as a score, whereas negative words are represented by negative integers. The overall score for a body of text is the average of those numbers.

Sentiment analysis isn’t perfect and there are plenty of examples where it will get things wrong, such as cases of sarcasm, context, or slang. For this reason, I’d be cautious using it for anything that requires rigour.

That being said, it’s an interesting technique for exploratory analysis. I’ve been looking for a good R package for sentiment analysis for quite some time, but more often than not they’re depreciated or don’t behave as expected. The Syuzhet package, however, seems to be what I was looking for.

I decided to use an online transcript of the Leaders Debate before the UK’s 2015 general election. I thought it’d be interesting to compare the sentiment of the different debaters and see how they vary over the course of the event.

Firstly, load some packages and set up a few variables for graphing later.

Then I use the rvest package to scrape the transcript and dplyr and data.table to reshape the dataset into a usable format. Feel free to skip over this block if you’re only interested in the sentiment functions.

I tend to prefer dplyr over data.table, but you can’t really go wrong knowing both. The data.table package allows you to easily assign a new value to a subset of your data based on a condition, as was done with speaker names in the previous step.

So now we have the transcript in a more usable format, all we have to do to is call the get_sentiment() function on the text column, and store the returning numbers in a new column.

Let’s look at the min, max, mean and median sentiment scores for each speaker.

To find the most positive text, you can arrange by descending sentiment score and use head to return the first row:

Alternatively, swap the head for tail to find the most negative speech.

It’s worth pointing out that both the sentences with the lowest sentiment score and the highest sentiment score received applause from the audience. Therefore, just because text/speech has a low sentiment score doesn’t mean that it will not resonate with people. Text with negative sentiment scores simply use a larger proportion of (or stronger) negative words. This is another example as to why, while interesting, you should be cautious about the assumptions you make when using this technique.

Using the order column as a rough proxy for time, we can also look at how each speaker’s sentiment changes over the course of the debate. 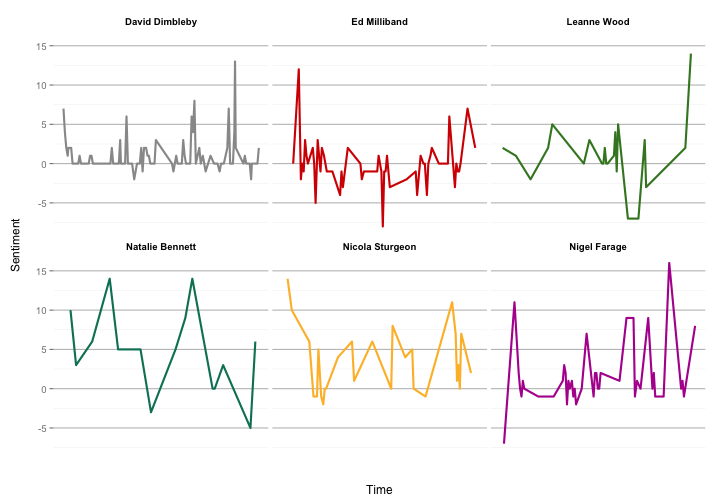 The Syuzhet package also supports the use of different Sentiment Analysis lexicons. The NRC method, for example, evaluates a body of text and returns positive values for eight different emotions (anger, anticipation, disgust, fear, joy, sadness, surprise, and trust), and two sentiments (negative and positive). You can compute these scores with the get_nrc_sentiment() function. 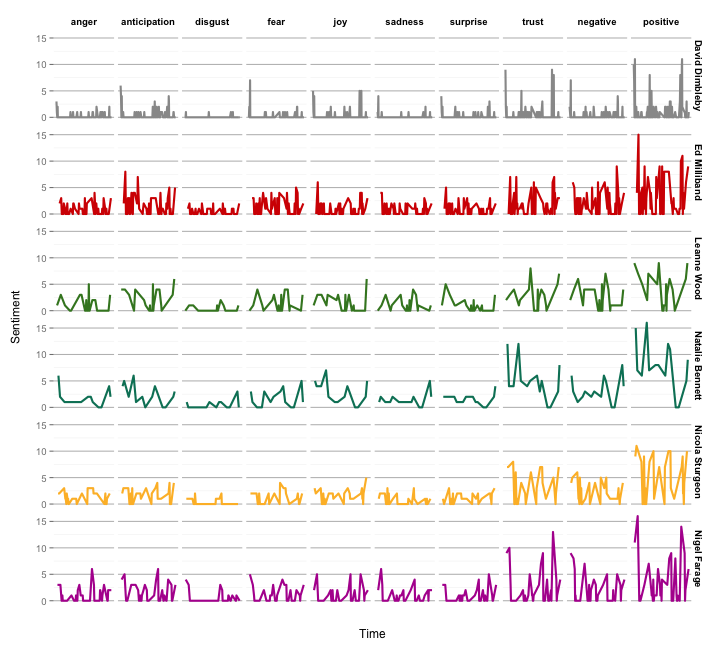 The Syuzhet package is an easy way to get up and running with Sentiment Analysis on R. The different lexicons highlight that there is no one universally recognised technique, and no one technique is perfect. It can, however, lead to some interesting exploratory analysis, especially when combined with web scraping. I think it would be interesting to explore sentiment analysis as one input into a larger predictive model, and hopefully I’ll get a chance to explore this over the next few weeks.